Our Projects for Children

Sounds of the Strings

This project was launched in 1996 after many years of children’s concerts given at the Gershman Y in Center City Philadelphia. It is a program with interactive elements designed to engage elementary school students in an entertaining and educational program of 45 minutes in length. We visit schools, currently under grants from the Connelly Access Program, which provides educational presentations to parochial schools in Philadelphia. 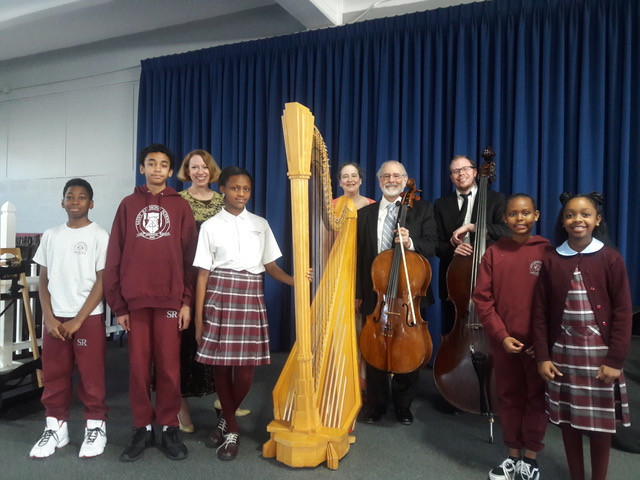 Our ensemble consists of Nancy Bean, violin and viola; Lloyd Smith, cello; Michael Chaffin, bass; and Anne Sullivan, harp. We begin by introducing the violin and viola with short excerpts: the violin plays “The Irish Washerwoman,” a fast and fun reel, and the viola plays from Dvorak’s “American” string quartet. We demonstrate their different and unique sounds and ask students to identify which instrument “sounds lower.” Then the cello plays the opening of the Dvorak Cello Concerto, demonstrating its much lower sound. The bass and harp are hidden from the audience. When we invite them onstage, there are gasps of amazement from students at the huge size of these instruments.

The harp and bass then have a brief “contest” to see who can play lower, higher, longer, and the most notes at once. Then the bass performs Saint-Saëns’ “The Elephant” from his “Carnival of the Animals” with the other instruments accompanying it. Lloyd then performs a “Tarantella” composed by William Henry Squire, a British cellist, accompanied by the harp. Both of these pieces demonstrate how music can tell stories. The “Tarantella” is helped by the use of a large tarantula hand puppet which seemingly “bites” Lloyd as he starts the piece.

Anne then explains how the pedals on the harp operate and she demonstrates the glissando, describing it to students as creating an “Aaah!” effect. She then performs “No One Can Stop Me Now” by Monika Stadler, which features North African rhythms and melodies. This demonstrates the sound of the harp with a “harp mute” — a strip of paper woven among the strings to produce a kalimba-like sound. 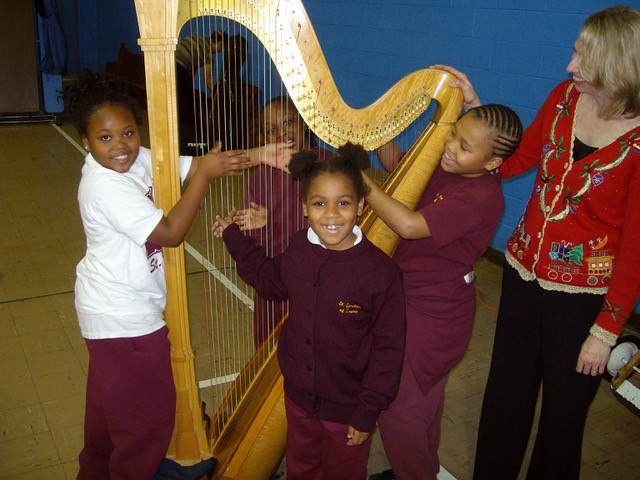 of years ago — back when there was no electricity, no radios, no TV, no CD players, no iPods, no smartphones — needed live music for her parties. The Queen, played by Nancy, orders Luigi Boccherini, played by Lloyd, to “write music for my party.” He first writes just one note; the harp plays it. Not satisfactory, of course. He then adds rhythm; the harp plays that. It is still inadequate. He then adds harmony, chords which make the music more beautiful, and the cello, bass and harp play that. But the Queen still needs music that is more interesting. So “Boccherini” adds a melody, which the Queen approves and then performs Boccherini’s Minuet with the rest of the ensemble. This skit is always a favorite of young listeners.

We then perform “The Entertainer” by Scott Joplin, an African-American composer who introduced jazz elements into music.

Interactive segments take place now as students are invited up to the stage to take a very short “lesson” in how to hold the violin and pluck its strings, and how to pluck the strings of the harp. We play “Pop! Goes the Weasel,” a traditional English social dance which gained words in the middle 1800’s. The students pluck strings when the song gets to “Pop! Goes . . .” as it involves two open strings on the violin (no left hand fingers). During the “lessons” Lloyd talks about the bow and Michael passes out samples of horsehair, which is used in bows.

Turning to music written for movies, we perform James Horner’s “My Heart Will Go On” from “Titanic,” which has become a modern classic recognized and loved by an entire generation of young people. 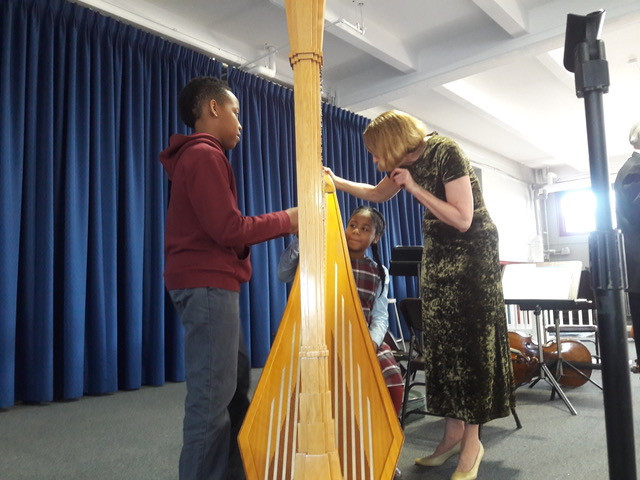 We close the program with a performance of the first movement of Mozart’s “Eine Kleine Nachtmusik,” another classical piece which has been used in many modern applications, including Baby Einstein toys and musical advertisements and is thus widely known and enjoyed.

We’ve received hundreds of letters of appreciation over the 24 years we’ve offered this program, from principals, teachers and students. They tell us how much they like our musical selections and how we play them, how much they learned, and how enjoyable it was to hear our program. Typical examples from students are: “I think you were the best and I hope you come back again. I like the bass.” “I really loved the music you played for us.” “I liked when the Queen made the composer do better.” “You are awesome!”

Typical thank you notes from principals and teachers are: “It was a wonderful experience for our students to watch, hear, and listen to. They were mesmerized — all of them.” “I thought the presentation was magnificent. It was a new experience for the students, and they were very receptive to it.” “I felt that the performers were able to make such an ‘unfamiliar’ topic entertaining for the children, who also loved it because it was interactive. BRAVO!” “Today you were a true inspiration to our kids. My appreciation to a wonderful group of musicians.”